You are here: Home/About AGOA/Apparel Rules of Origin 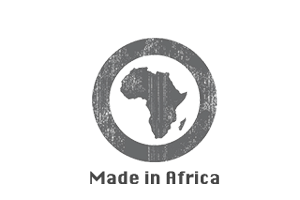 Rules of Origin (RoO) are the requirements which set out the working and processing that must be undertaken locally in order for a product to be considered the “economic origin” of the exporting country.

This distinction becomes necessary and important where some of the materials used in the production or manufacture of a good are imported from other countries.

The purpose of RoO is to prevent trade deflection and transhipment, whereby goods made elsewhere are merely routed through a beneficiary country (of trade preferences) with no or insufficient local value-adding activities having taken place. Without RoO, trade preferences would be exploited and severely undermined by non-beneficiary countries. The stringency of the relevant RoO impacts on the ability of producers and exporters to meet their requirements and can have a significant impact on trade.

While apparel and textiles articles are not included under the General System of Preferences (GSP) program, on which AGOA is based, AGOA nevertheless provides qualifying countries with duty-free market access for these items, provided adherence with the RoO and general administrative requirements including the textiles certificate of origin. 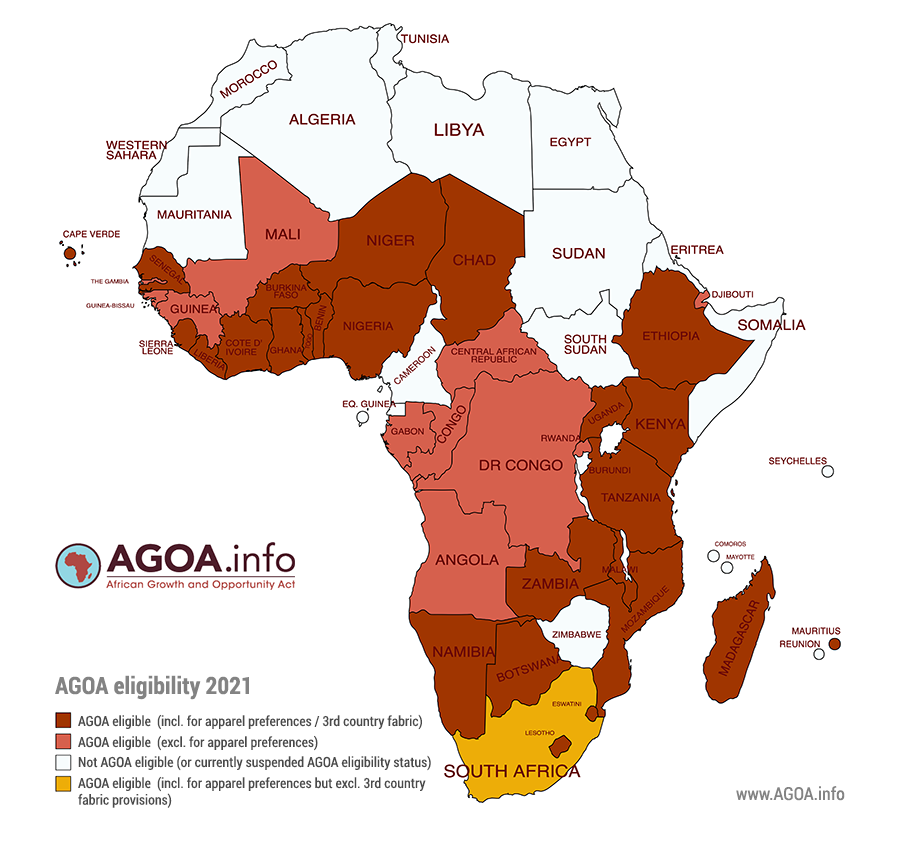 Countries that are eligibe under the ‘Wearing apparel’ provisions (so-called Category 9 products) are listed in the Country Eligibility section.

Preferential treatment for handloomed fabric and handmade articles made from such handloomed fabric is avalaible to a number of AGOA-eligible countries. These are likewise listed in the table in the Country Eligibility section.

Summary of Rules of Origin categories for apparel under AGOA AGOA - Spotlight on the textiles and apparel sector [Updated 2021]

An overview of key features of exports of textiles and apparel products to the US by AGOA beneficiaries, including the relevant rules of origin provisions. For printing, set printer to 'fit to page'.  Double-sided brochure. Updated 2021. 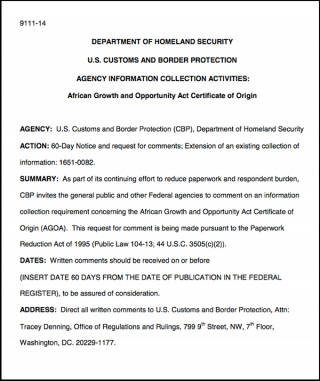 Review of AGOA certificate of origin - request for comments 2013

U.S. Customs and Border Protection is extending through August 14, 2013 the period for public comment on the proposed extension of the African Growth and Opportunity Act Certificate of Origin. For preferential treatment under AGOA, the exporter is required to prepare a certificate of origin and provide it to the importer. This certificate includes information such as contact information for the importer, exporter and producer; the basis for... 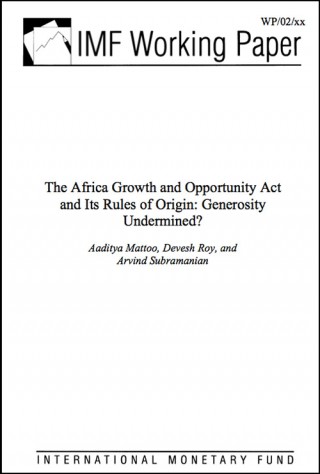 IMF Report - AGOA and its Rules of Origin: Generosity undermined?

This paper describes the United States recently enacted Africa Growth and Opportunity Act (AGOA) and assesses its quantitative impact on African exports. The AGOA expands the scope of preferential access of Africa's exports to the United States in key areas such as clothing. However, its medium-term benefits - estimated at about US$100-$140 million, an 8-11 percent addition to current non-oil exports-would have been nearly five times greater... 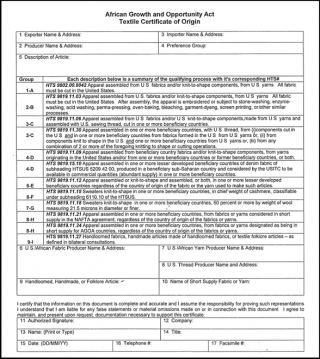 Textile certificate of origin (May 2008 version).